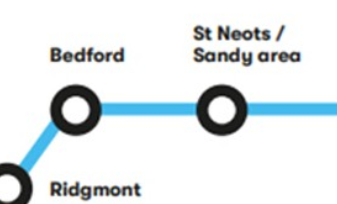 Background:
The Government decided to build “East West Rail” between Oxford and Cambridge passing through Bedford Borough.
In 2009-10 there were plans to rebuild Bedford’s main station for East West Rail. Those didn’t involve demolishing any housing. The LibDem/Tory government cancelled them in 2010.
In Spring 2019 East West Rail (EWR) held public consultations on Bedford to Cambridge routes. In early 2020, Route E, travelling north and east from Bedford via Bedford’s main station, was selected.
In March 2021 the Government decided to drop plans for much of the OxCam Expressway road.
On 31 March 2021 EWR published consultation documents revealing around 30 properties are at risk of demolition in Ashburnham Road (on the railway side of Ashburnham Road between the current station entrance and Midland Road), contrary to previous assurances, and a similar number of properties north of Bromham Road.
Our position:
The Green Party is committed to social and ecological justice. We seek to minimise environmental impacts while benefitting as many people as possible, including removing threats of home demolitions.
It’s important to reduce total transport use while shifting from private road use to rail. Sustainable East-West connectivity is currently terrible, meaning over-reliance on roads. This causes high carbon emissions, air pollution and congestion. Shifting to rail for both passengers and freight is vital for environmental and social reasons. If East-West rail isn’t built, the more harmful OxCam Expressway will return.
We are angered by the Government’s decision not to electrify EWR. Electrification is far easier and cheaper to do from the start. It would enable renewable energy to power the entire route. Not to electrify is a shocking wasted opportunity.
The final decision won’t be perfect, but social benefits for people without cars mustn’t be lost because people in relatively privileged situations are worried about noise.
Demolitions should be minimised. Previous plans for station rebuilding didn’t require any in Ashburnham Road, so there’s no need for them now. Between Beverley Crescent and the Poets area, there’s enough land to fit six tracks in without threatening dozens of houses. East West Rail including Bedford station creates important opportunities for inter-regional connectivity, further reducing damaging road travel and emissions. Station rebuilding which reduces chances of demolitions north of the station will improve connectivity at Bedford from Leicester and Nottingham, by providing a fast line platform for southbound EMR trains.
Redeveloping Bedford station gives chances to reduce station car trips. There must be a comprehensive station travel plan providing excellent bus connections, safe cycle routes (and secure cycle parking) and ensuring people are safe walking there.
All five routes considered by the 2019 consultation were problematic. We aren’t committed to a particular route east of Bedford’s main station but enough funding must be found to avoid the worst consequences. However, a south-of-Bedford route would kill prospects of the promised Wixams station, which could greatly reduce car journeys by the growing population south of town.
Any resident would feel anxious with a large project near where they live, especially with unnecessary demolition threats. All large infrastructure can cause negative impacts, so it’s essential they’re minimised and gains, including biodiversity gains, are embedded. A Strategic Environmental Assessment of proposals to measure ecological and social impacts of the route is vital.
What next?
We urge residents to respond to the consultation which runs until 9 June. As Greens we’ll argue for extensive measures, including tunnels, to minimise impacts on urban Bedford, north Bedfordshire landscapes, and to ensure net biodiversity gain. We’re prepared to argue for options not currently offered.
The consultation is here
Do ask East West Rail detailed questions about your concerns here