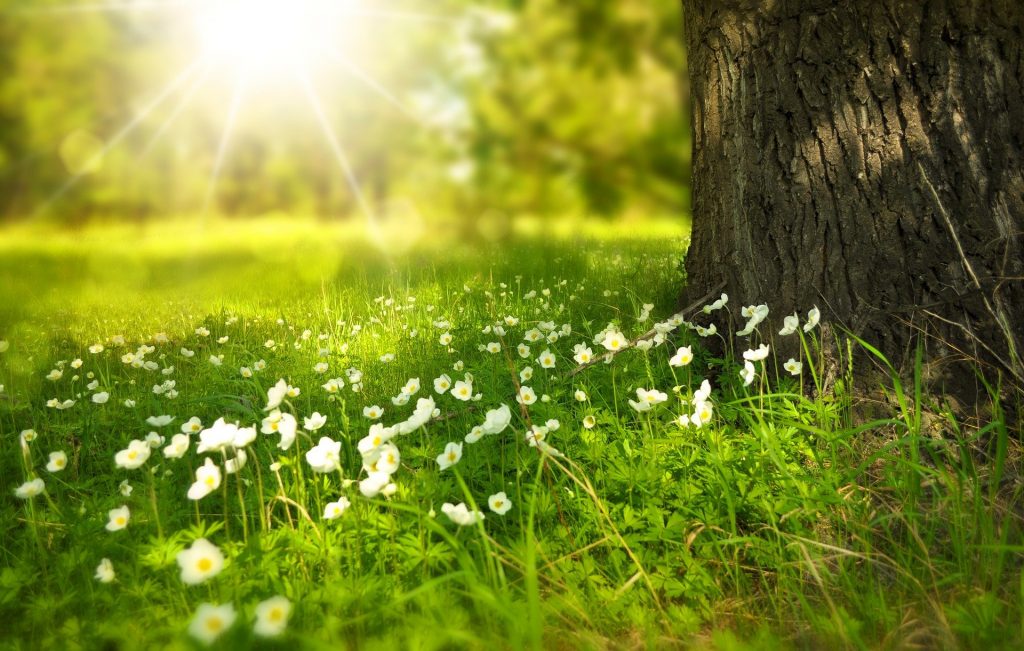 Welcome to the Castle Ward Councillor Newsletter. We are pleased to tell you about recent successes and things we're working on and supporting!

In May we had a long meeting with local police officers, our first in-person one for several months, to talk about local crime and Anti-Social Behaviour which affects people’s quality of life and makes especially older and vulnerable people afraid to venture out. As always, please continue to report together to police, as especially where there are repeated reports, we are seeing arrests. Please always call 101 or, quicker and easier, report online at https://bedfordshire.police.uk/report/ 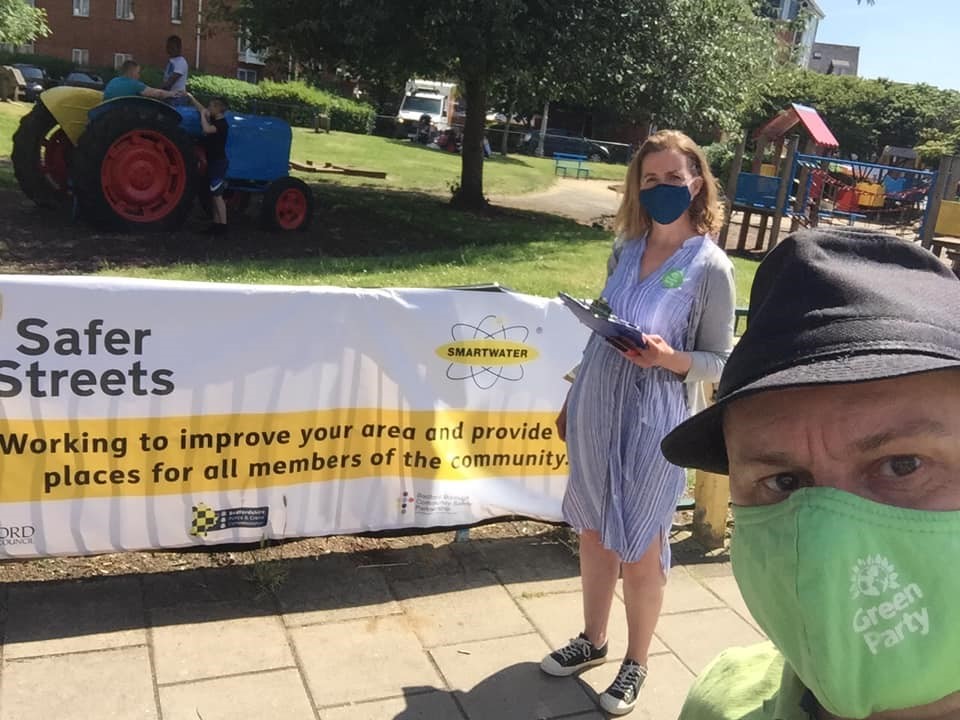 Over the last week, Ben and Lucy have been out door knocking in the Midland Road area again. Talking to residents, to hear their concerns and support the Safer Streets project. Safer Streets are offering Midland Road residents free SmartWater, better window and door locks and Ring doorbells fitted. As well as new gates, which help to reduce fly-tipping and anti-social behaviour. Many people have taken up the offers and police have told us about examples of the Ring doorbells being useful to them. Before the end of June, there’s still just about time to get a Ring doorbell fitted if you email saferstreets@bedford.gov.uk. Click for more information.

What is a Ring doorbell?

The new Russell Avenue electric vehicle charging points are up and running. Along with four other locations in residential areas, they are funded by the Office for Low Emission Vehicles. These ‘Connected Kerb’ posts are specifically aimed at local residents who have no off-street parking. Initially, the council intended them to be a free-for-all in terms of parking in the bays. Not surprisingly, this has meant that EV drivers were often not able to find a free bay to charge. So, a Traffic Regulation Order is underway to limit the bays to EV vehicles only. We’re hearing demands from residents who have switched to or plan to switch to, an EV. They need the confidence of accessible charging.

This location was one of several that we suggested to council officers, fulfilling the criteria of being easily accessible to as many streets as possible and NOT directly in front of someone’s front door (such that if they didn’t have an EV they’d never be able to park outside their house). We support EV infrastructure for its role in helping improve local air quality and reducing carbon emissions while sustainable energy solutions are realised. We know, though, that EVs are not currently affordable for many.

Our preferred transport options will always be those journeys that have the minimum overall impact on our environment. Such as reliable and affordable public transport and safer walking and cycling routes, as well as a car club to reduce parking congestion. These are what we are really pressing for. 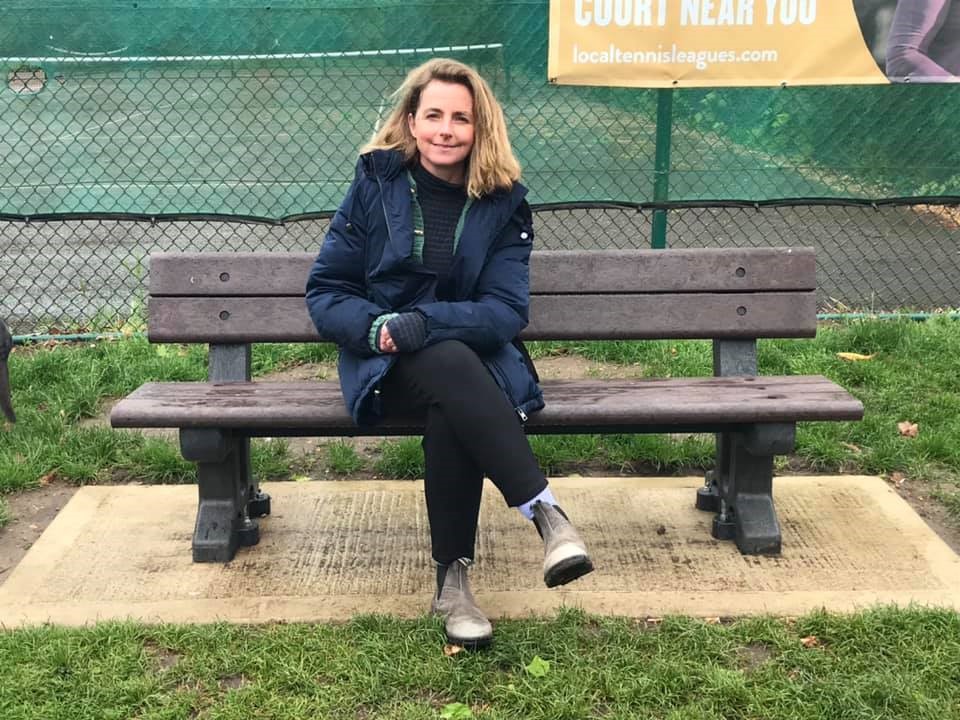 In response to requests for extra seating in the play areas in Russell Park, Lucy and Ben and Newnham ward’s councillors, Cllr Hendrickx & Sampson, paid for two benches out of ward funds.

These have been installed ready for parents and grandparents to enjoy while watching their children play safely outdoors; whatever weather the English summer decides to bring us! 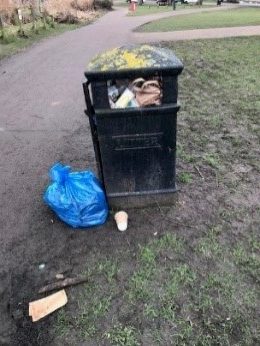 We noticed a big problem with overflowing bins and litter blowing about in Russell Park last summer, despite bins being emptied daily. The bins really needed all to be dual-use with recycling compartments because much of the ‘waste’ is plastic bottles and drinks cans. We asked for new, larger, dual-use bins, which have now been installed! Lucy is also working on getting stickers for the bins to tell people that ‘compostable cups’ should unfortunately NOT go in the recycling compartment (we know, it’s confusing). 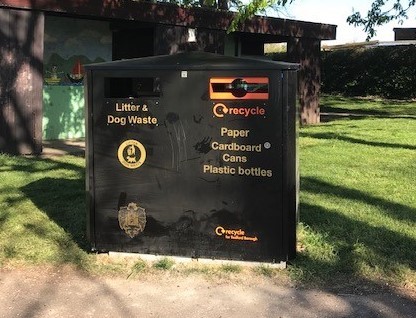 The advice is that it’s fine for people’s re-usable cups to be refilled at cafes, with basic hygiene rules followed: https://www.citytosea.org.uk/reusables-during-covid/ . Lucy wants to work together with some nearby businesses to see what ways there are to reduce waste and increase recycling, without a negative impact on our hard-working independent businesses. By the way, June 16th is World Refill Day. Sign up if you’re a local business.  https://www.refill.org.uk/world-refill-day/

We’re pleased to see almost all of them installed now. 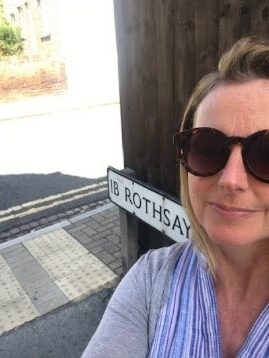 Many locals are not aware that Castle ward includes the town centre and all the area as far as the station, as well as the area around Kingsway/Cauldwell Street/Cardington Road. The Local Government Boundary Commission for England came up with a revised set of boundaries that will change Castle Ward a lot. We are pleased that the whole of the Castle Road area will now be in the same ward. It should make for better representation and fits much better with the reality of the community. This, in turn, will mean that the area between the town centre and the railway will be in a new "Priory" ward, and able to have its own distinctive voice.

This ability of the commission to suddenly make odd changes also means that wherever residents are, it is absolutely worth responding again to the Commission: whether to make sure the Commission don't change their minds about their better ideas or to reject their worse ones. Please contact Ben here

In all parts of the current Castle Ward, Lucy, Ben and the team are determined residents will continue to have top-class representation, both from Lucy and Ben until the elections in 2023 and after (whether continuing as the councillors for the area themselves, or by making sure excellent Greens are elected for all of the three wards).

Keep an eye out for the wildflowers sown in Russell Park, funded with some Castle ward funds. The ground was prepped and sown a few weeks ago and the germination has been mostly good. (With current rain being helpful). Let Lucy know if you can help volunteer with weeding and maintenance this year. With the hotter weather, you can also help any new street trees near you by regularly watering them to increase their chance of survival in the first couple of years. Lucy also coordinates the maintenance of the community herb garden on the Rothsay/Castle roundabout and welcomes new volunteers. Lucy earmarked an unloved area outside the Salvation Army for planting a while ago and ward funds have created attractive new planting there. 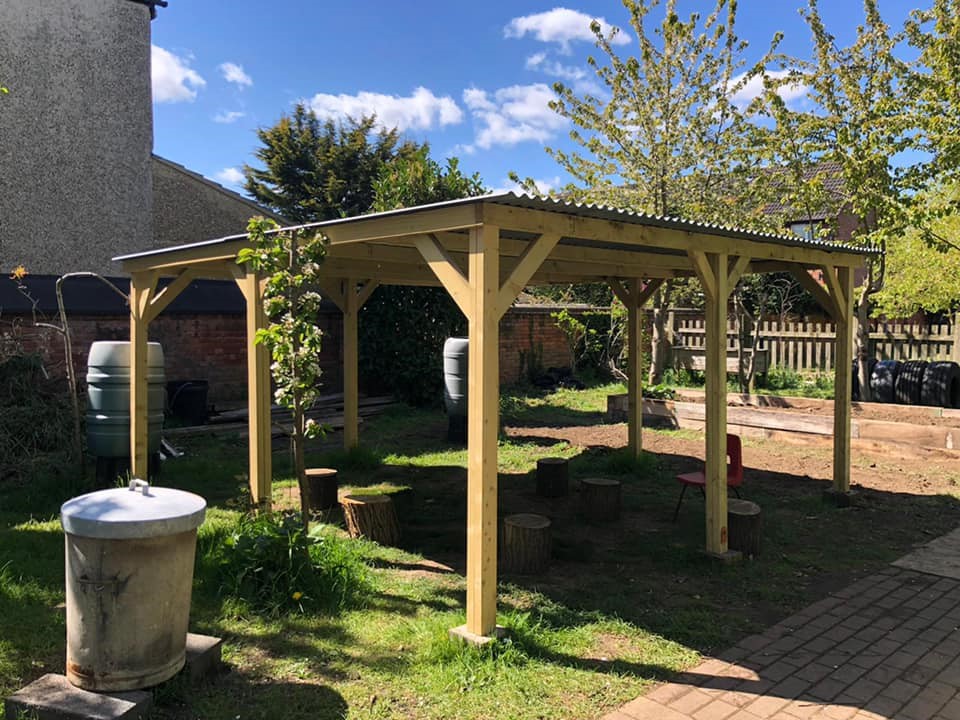 We spent ward funds on improvements to the outside area at Castle Newnham Priory, aware that outdoor areas are more important than ever at the moment. Additions included a new ‘mud kitchen’ for play, materials for an outdoor classroom in the kitchen garden area and for a ramp and gate to allow ‘freeflow’ for nursery children to benefit from the wildlife area. A handful of staff have worked really hard and donations of things from the community have helped too. Covid restrictions have sadly limited those allowed to volunteer on the site, but Lucy was able to spend a day in the Easter holidays helping to tidy up and helping plant new trees and hedging from the Woodland Trust.

Since being elected in 2019, Lucy and Ben have pestered on the issue of vehicles, including buses, idling their engines for long periods, especially outside schools. One of the worst places, affecting residents greatly, has been Bedford Girls School on Cardington Road. We got no-idling engines signs put up and regularly report illegal and dangerous parking there. There are a limited number of parking enforcement officers for outside schools but please help by reporting bad parking as it’s really widespread: Parking.Services@bedford.gov.uk

Nearby on Rope Walk, we got the speed limit reduced from 40 to 30mph after locals living nearby reported increasing noise from speeding during the lockdown. So far not everyone seems to have registered the new lower limit! However, police would not have agreed to the reduction unless they thought it was reasonable and could be enforced.

We were really pleased to give Primary Priory ward funds for their brilliant new interactive, educational wall, created by local artist Anne-Marie Stijelja, and look forward to being able to visit before very long. 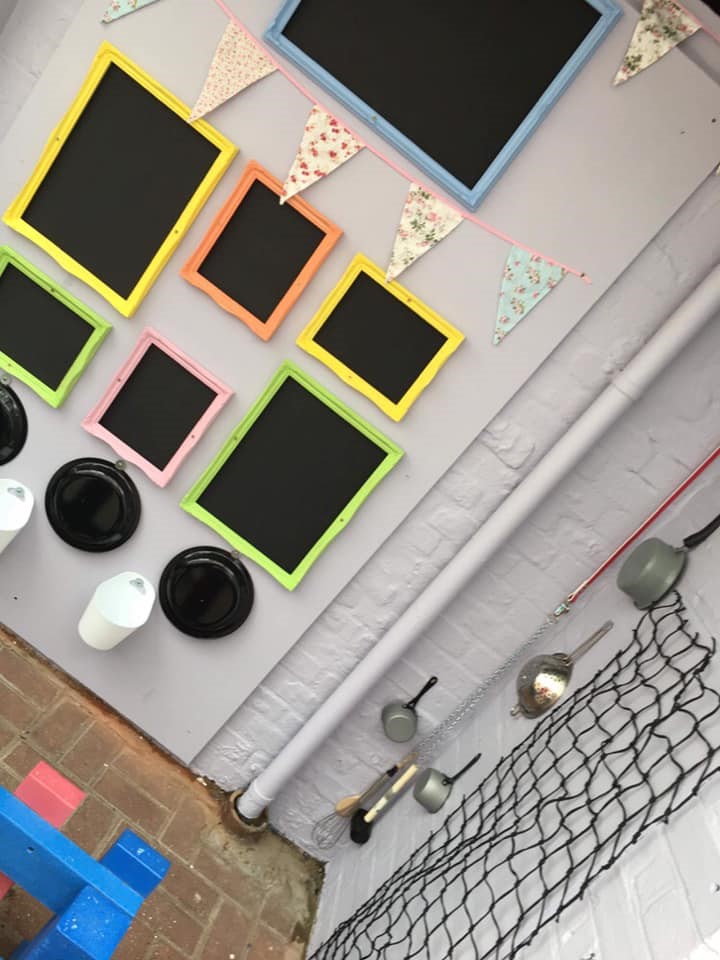 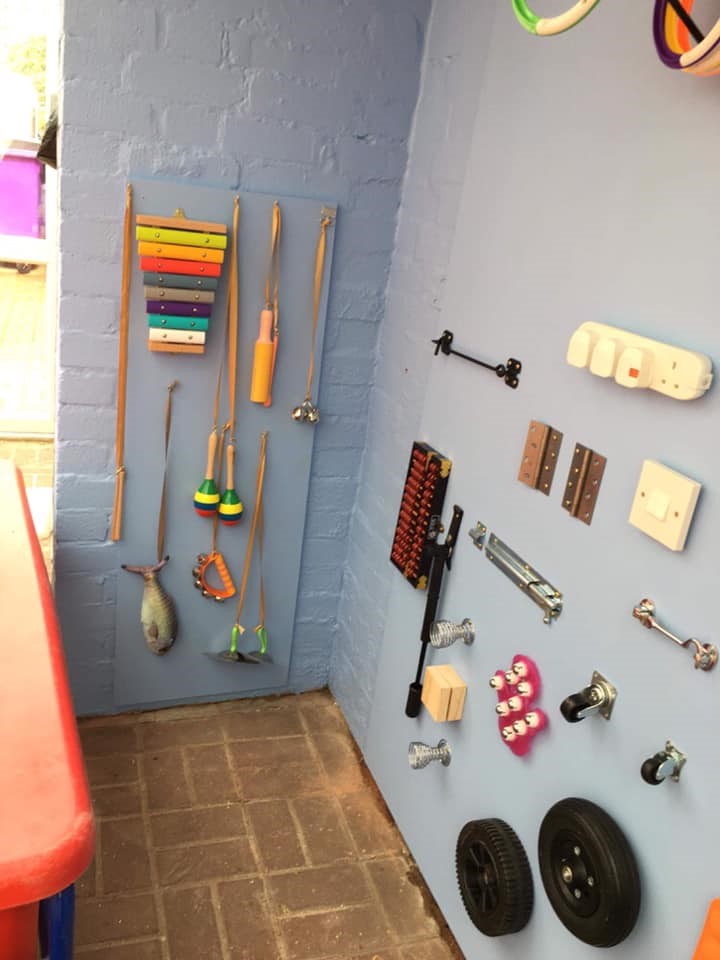 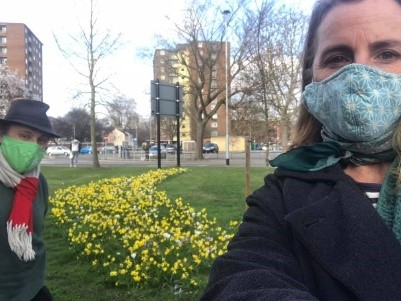 Planting at the school

We also used ward funds for bulb planting right outside Priory Primary and were glad that parents in the queue at the end of the school day had something lovely to look at in the Spring, as well as the flowers being a good early food source for pollinators. 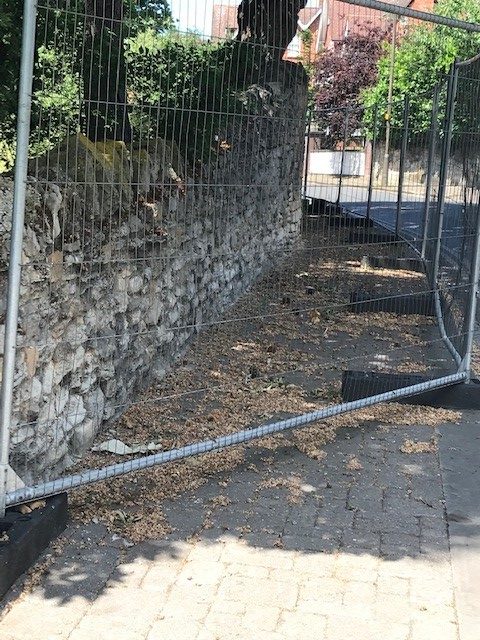 While some things may seem minor in the scheme of things, they present a significant hazard to those who are vulnerable.

Lucy has been regularly pestering the council for a timeline for the repair of the old wall on Newnham Road near Castle Mound since residents pointed out it looked dangerous last summer. You may have seen that it’s been fenced off for ages so that footway has not been usable. The delays seem complicated, partly attributable to Covid and also new staffing as well as heritage and funding. We now expect to see work start before long.

We regularly report broken, dangerous paving. A particularly dangerous patch on Greyfriars was fixed quickly after Ben reported it. 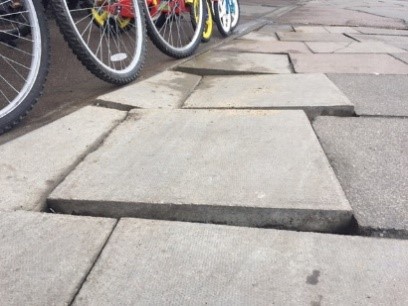 Ben also reported a gas leak in Ashburnham Road, which was soon given the attention it needed and he was also able to help residents in Grafton Road with issues around their cellars which were flooding.

Sadly, we have reported numerous incidents of fly-tipping in the Midland Road area and encourage residents to report online (or to us) via the Council, especially if they know who’s responsible. 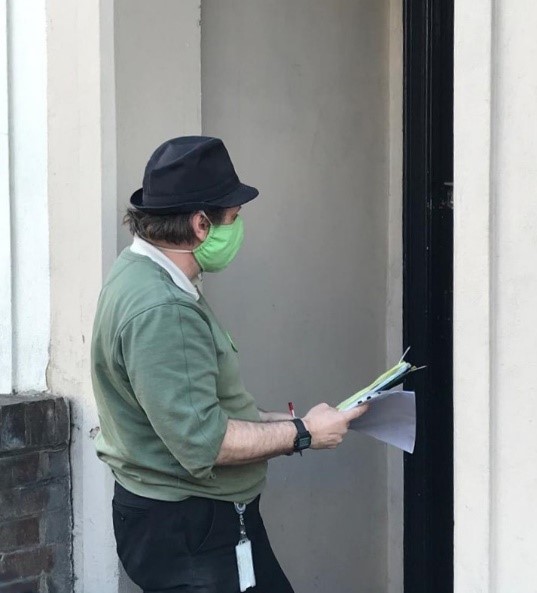 Both councillors put a lot of work into supporting residents threatened with demolitions as part of the East-West Rail proposed rebuild of Bedford’s main station. This involved calling on affected residents, numerous phone calls and emails, running a petition, making speeches at council meetings, supplying information to those who signed the petition, and Ben writing a 6,000 word response to the East-West Rail consultation. Still, people are claiming that we have voted for things we haven’t voted for (it helps if you read the wording of the motion!), so to clarify, we have consistently taken the position that the line should be electrified, and we have not voted in favour of a particular route.

In the full response Ben wrote, he argued that if the line goes north out of Bedford, “There should be a tunnel as the line curves east, passing under Carriage Drive and the area close to the ancient woodland.”

Ben put a lot of work into developing ideas for Bedford station that avoid the need for demolitions of properties in central Bedford while maximising the chances of improved train service, and which would integrate well with bus, cycling and walking networks.

The end of this consultation does not mean the end of our concern: if the scheme goes ahead, St Johns station and the line through it will be rebuilt, meaning closures of each of Ampthill Road and Kempston Road (one after the other).

Bedford’s main station will be rebuilt, meaning disruption, even if we manage to avoid the demolitions (and that will take more lobbying and campaigning for affected residents). 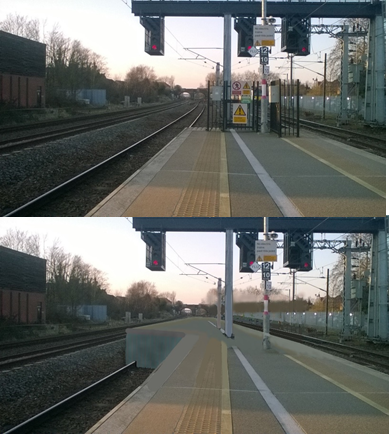 That's it from the Castle Ward Councillor Newsletter early summer 2021, just a few reminders and useful links left to share:

Date for your diary:

Join the cross-party ‘Birthday protest’ for NHS, also July 3rd at 10am. (Green councilors have already committed to being at Safer Streets, above) https://lutonandbeds.greenparty.org.uk/2021/06/18/nhs-birthday-protest-bedford/

Can you help by reporting to the Council online if you spot issues? It’s really quick and you are informed as soon as an issue is resolved.

How can we help you? We haven’t been able to hold our usual in-person ward surgeries for Castle residents due to Covid, BUT perhaps expecting people to ‘come to us’ was not the best way, so we continue to door knock to hear and act on local issues.